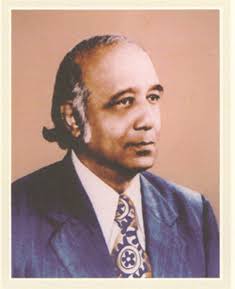 Kasthuri Sreenivasan (1917-1991) was among India’s most well-known textile technologists and industrial sociologists in the decades that followed the country’s independence. He was born on 12th May, 1917 and spent his formative childhood years in Karadibavi, a hamlet on the outskirts of Coimbatore.

Following an undergraduate degree in Physics from Presidency College, Chennai, he pursued a Masters Programme in Textile Technology at the College of Technology, Manchester, England. He spent eight years in England and came back to India in 1944. He briefly worked with the family-owned textile mill, Kasthuri Mills before he took up the position as Founder Director of South India Textile Research Association (SITRA).

As an institution builder, he fostered an environment of scientific enquiry, applied research and successfully implemented several processes to document quality control in the spinning industry. In time, SITRA also became a comprehensive solutions provider to the Spinning, knitting and power loom sectors. He was conferred the Padma Bhushan by the Government of India in 1969.

The Coimbatore Cancer Foundation was started in 1991, following his battle with cancer. The goal of the foundation is to help alleviate the suffering that comes with cancer and to provide holistic support to patients and their families.

Kasthuri Sreenivasan was a prolific writer and wrote more than 25 books covering various genres such as non-fiction, fiction, short stories, poetry and plays. His work on industrial sociology is still widely read in academic circles. He was among the very few of bilingual writers during his time and authored two books in Tamil. He was also an ambitious translator and undertook the work of Tirukkural, the Sundara Kandam from Kamba Ramayanam and Silappadhikaram.

His wife, Barbara Sreenivasan was an artist and explored the watercolour medium in her work. The idea of building an art gallery and space for fellow artists was a common dream for the couple. During their numerous visits to England, her home country, they made meticulous notes on how the gallery in Coimbatore would take shape.

Kasthuri Sreenivasan was conferred with the Padma Bhushan award, India’s third highest civilian honour, in 1969 for his outstanding contribution to the textile industry and research. He was also conferred the Honor Summus medal by the Watumull Foundation, USA for his pioneering work in industrial sociology.

April 12, 2021
Agritech startup Waycool has raised Rs 145 crore or close to $20 million in a fresh round from existing backers Lightstone, Lightbox Ventures and Netherland-based FMO Development Bank. Waycool has approved the allotment of 84,407 Series C 2 preference shares at an issue price of Rs 17,180.46 per share to raise Rs 145 crore, regulatory filings show. Lightsone and Lightbox have put in Rs 61.5 crore each whereas FMO invested Rs 21.7 crore. In February 2020, the Chennai-based startup had  secured $32 million  in an equity and debt funding round led by Lightbox. The company also raised $7.8 million in a debt funding round from Samunnati, RBL Bank, and venture debt firm InnoVen Capital in December 2020. As per  Fintrackr ’s estimates, Waycool has reached a post-money valuation of Rs 1,400-1,450 crore or $193-199 million after the fresh capital infusion. Founded in 2015 by Karthik Jayaraman and Sanjay Dasari, WayCool is a business-to-business startup that connects farmers and food producers
Post a Comment
Read more

April 06, 2021
Among Bengalureans, Reddy Veeranna is 5th (30th All India)  in the GROHE Hurun Real Estate rich list (wealth Rs 3,150 crore)  Despite the pandemic-induced plunge in realisations, the number of new ‘rupee’ billionaires in the realty world has continued to swell, adding eight new entrants to the list of Hurun India’s 100 richest realty developers. According to the Grohe Hurun India Real Estate Rich List, around 20 Bengalureans have booked their slots in the top 100 rich list. Hurun Report today released the 4th edition of the GROHE Hurun Real Estate Rich List. As the future of Indian real estate looks bright, Hurun India and GROHE are immensely proud to track this data at the beginning of a promising and exponential growth. Rank 30:   Reddy Veeranna (wealth Rs 3,150 crore, Manyata Tech Park and Embassy Office Parks)
Post a Comment
Read more

September 07, 2016
Challapalli is a village in Krishna district of the Indian state of Andhra Pradesh. It is located in Challapalli mandal of Machilipatnam revenue division. The Rajah of Challapalli, Srimanthu Raja Yaralagadda Ankineedu Prasad Bahadur Garu built this Palace in the early 18th centaury. Then onwards Challapalli became the capital for the Devarkota Estate and the town developed around the palace. It remains as a great example of Andhra architecture to this very day. . The last crowned monarch of Challapalli was Srimanthu Raja Yaralagadda Shivaram Prasad Bahadur Garu (1906-76). As of 2012, the Royal family members no longer reside in the fort. Yarlagadda Rajas of Challapali fort and Zamindari that ruled this area from 15 century now the kingdom has gone due to land cease act that was kept by the Indian Government but their greatness was in the words of the people in that area . The Raja of Challapalli (Devarakota) in Krishna district was among the richest of the Rajahs and h
3 comments
Read more

Kamma High court and Supreme court Judges Past and Present

March 31, 2021
Biden has nominated Indian- American Judge Rupa Ranga Puttagunta: Nominee for the Superior Court of the District of Columbia If confirmed by the US Senate, Judge Puttagunta would be the first Asian American and Pacific Islander (AAPI) woman to serve on the US District Court for the District of DC, the White House has said.  Rupa's  parents migrated to USA from 'Kalavapamula' Village, Krishna District, AP, India.  Judge Puttagunta received her Juris Doctor degree from Ohio State Moritz College of Law in 2007 and her B.A. from Vassar College in 2002.
Post a Comment
Read more

April 06, 2021
The President of India Ram Nath Kovind has appointed Justice Nuthalapati Venkata Ramana as the 48th Chief Justice of India, accepting the   recommendation     made by the outgoing CJI SA Bobde, who is retiring on April 23 . As the CJI, Justice Ramana will have a term till August 26, 2022. Before his elevation to the Supreme Court on February 17, 2014, Justice Ramana was the Chief Justice of the Delhi High Court. He was born in an agricultural family on August 27, 1957 in Ponnavaram Village, Krishna District, Andhra Pradesh. He enrolled as an Advocate on February 10, 1983 and practiced in the High Court of Andhra Pradesh, Central and Andhra Pradesh Administrative Tribunals and the Supreme Court of India in Civil, Criminal, Constitutional, Labour, Service and Election matters.He has also functioned as Additional Advocate General of Andhra Pradesh. He was appointed as a permanent Judge of the Andhra Pradesh High Court on June 27, 2000. He functioned as Acting Chief Justice of Andhra Prad
Post a Comment
Read more