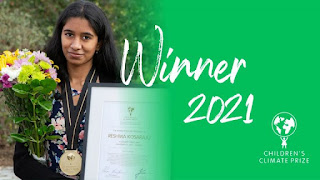 Forest fires have become a global problem, causing over 339,000 premature deaths worldwide – and threatening biodiversity by destroying animals and nature. While the world is still looking for a solution for this issue, Reshma Kosaraju’s project on the uses of AI technology to predict forest fires has won her the Children’s Climate Prize, 2021. A fifteen-year-old from Saratoga, USA, Reshma’s innovative and solution-oriented approach to forest fires, a highly topical and growing global issue, made her project stand out.

The Children’s Climate Prize (CCP) was started by the Swedish company Telge Energi. It’s been given every year since 2016 to a person between the ages of 12 and 17 who has made “extraordinary efforts” to improve life on the planet for children now and in the future. This year, the prize organizers report that a record number of young people from 32 different countries were nominated for the prize.

The project — AI against forest fires — can predict forest fires with almost 90 per cent accuracy. It uses open data, such as temperature, humidity, wind speed, soil moisture and human behavior to, with the help of AI, calculate where and when the probability of a forest fire occurring is greatest.

Reshma hopes the Children’s Climate Prize will draw attention to her project, so that more people can become aware of the AI model’s existence. “I’m so happy and my hope is that this win will lead to more people hearing about AI against forest fires, and that it will become a universally accessible tool for predicting forest fires. I especially wish for people living in areas more prone to forest fires to be aware and make use of this project, as it could greatly improve preparedness,” she said in a note on the project.
Currently, this technology is a functioning prototype on a computer. However, the goal moving forward is to make the model publicly available in the form of an app, while heavily marketing its use within fire departments to proactively mitigate forest fires. Appreciating Reshma’s effort and brilliance, Johannes Boson, CEO of Telge Energi and Chairman of the Children’s Climate Foundation said: “The world needs Reshma’s innovation and we need to support the courageous youth who are working for a better tomorrow. We hope that the win will help boost Reshma’s hopes for the project – both financially and through the increased awareness that comes with the prize.”

This year marks the sixth edition of the Children’s Climate Prize, one of the world’s biggest international climate awards for young innovators, entrepreneurs, conservators and changemakers.

September 13, 2017
NTV Chairman Chairman Tummala Narendra Choudhary’s daughter Rachana Chowdary got engaged to Coastal Group owner Sabbineni Surendra’s son Vishnu Teja on 30th July, and the event was attended by several VIPs and celebrities from Telangana and Andhra Pradesh. For the engagement reception, Rachana wore a black sequin embellished gown paired with simple diamond necklace set. The wedding event is scheduled to be held on 23rd September at Shamshabad in GMR. Chowdary is leaving no stone unturned to make the event a memorable one. Even in case of wedding cards, he is showing his mark.T he  celebrities in the country are issued wedding cards that cost up to Rs 1 lakh. Such cards are  up to 250. Moreover, this card is issued along with a Pattu Saree, Pattu Pancha, silver and gold items in a specially designed box. These cards are only for VVIPs. One lakh rupees worth of cards for VIPs have also been distributed.  In addition, there are lakhs of ordinary cards. The wedding mandapam
3 comments
Read more

November 26, 2021
One of the World-leading physicist and Australian National University professor Chennupati Jagadish has been elected as the next president of the Australian Academy of Science. The nanotechnology pioneer will be the 20th president in the national science organisation's history and the first Australian of Indian heritage appointed to the coveted position by his peers. The role of academy president will have him champion the cause of scientific excellence while leading the organisation in providing advice to the Australian Parliament. He will replace biochemist and molecular biologist Professor John Shine, who has held the position since 2018. The academy's home, the Shine Dome, was renamed after the outgoing professor in 2000 in recognition of a $1 million donation he made to help restore the iconic Canberra building. Professor Jagadish takes on the role of president at the same time the academy is reporting young scientific researchers have been severely impacted by the
Post a Comment
Read more

Telugu TV Channels own and run by Kammas